The Legion of Extraordinary Dancers

Christopher Scot grew up in Maryland. At the age of 14, he moved with his family to Hollywood, CA  and entered the 9th grade at Hollywood High School.  He applied and was accepted into the performing arts magnet program.

Scott has appeared as an actor and dancer in several movies including Step Up 2 and Step Up 3. He has also garnered a number of notable credits as a choreographer Including the 82nd Annual Academy Awards and So You Think You Can Dance.

In 2009, Scott teamed up with Harry Shum Jr. to choreograph the super hero inspired web series The Legion of Extraordinary Dacners, aka The LXD.[7] An experiment in storytelling through dance.

Hip Hop is a broad umbrella term that is made up of many specific styles and techniques. The foundational styles include poppin, breakin, locking and house styles. Hip Hop continues to evolve and encompass many new styles. Newer styles include vogueing, wacking, krump, tutting and animation.

The Groovaloos is a stand out Dance Crew that has been featured on stage, film and television brings historical foundations of Hip Hop to the forefront of their work. 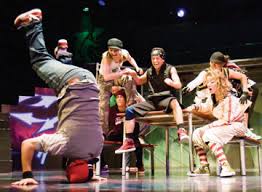